Yesterday on the playground at school our precious Isa hit her head HARD!  So hard that she started to vomit, she was dizzy, and not oriented to her surroundings. School called Dawn and Dawn right away contacted her doctor. Isa's doctor told Dawn to get Isa to the Emergency Room FAST!  Go to the closest ER!!! 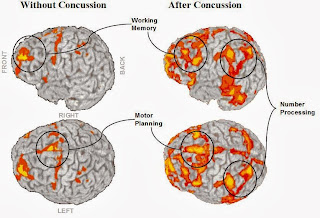 While Dawn was driving..I right away started to Google Head Injuries.  I found a great site Seattle Children's Hospital with very good info. I checked the info with a nurse friend and she said everything is correct.  I wanted to share with all of my readers these important things to be aware of in case your child hits their head.
Head injuries are not limited to only injuries that happen while playing sports. Isa was playing on the playground at recess - she tripped and hit a pole from the playground equipment. She fell backwards and hit the back of her head.

Know what to do and when in case your child has a head injury!!!!

Call Your Doctor NOW (day or night) IF .....................
What is a CONCUSSION?
A concussion is a type of traumatic brain injury that is caused by a blow to the head or body, a fall, or another injury that jars or shakes the brain inside the skull. Although there may be cuts or bruises on the head or face, there may be no other visible signs of a brain injury.
You don't have to pass out (lose consciousness) to have a concussion. Some people will have obvious symptoms of a concussion, such as passing out or forgetting what happened right before the injury. But other people won't. With rest, most people fully recover from a concussion. Some people recover within a few hours. Other people take a few weeks to recover.
In rare cases concussions cause more serious problems. Repeated concussions or a severe concussion may require surgery or lead to long-lasting problems with movement, learning, or speaking. Because of the small chance of permanent brain problems, it is important to contact a doctor if you or someone you know has symptoms of a concussion. I found this info on WebMD.
The ER Doctor sent Isa home - she has a concussion. No school today and no gym for at least a week.  She is seeing her regular doctor today.  ER doctor told Dawn..to watch her and make sure she does NOT hit her head again soon.  Thank goodness she will be okay.