“Just what is gluten?”

After some investigating, and here’s the down and dirty on gluten!

Gluten is a protein found in grains such as wheat, barley and rye. 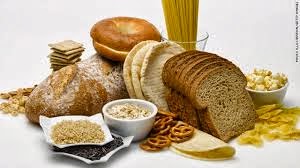 But what does gluten do? Gluten helps give dough that elasticity, so you can pound it and pull at it when you’re kneading bread. It also helps provide that chewy texture in the final product.
Gluten makes foods thick – and adds taste – so you’ll find gluten in a lot of foods beyond bread. Salad dressing, soy sauce and seasonings all have gluten! Many people give two forks up to gluten. So why all this gluten-free stuff?

It’s estimated that 1 in 133 Americans has a chronic digestive disorder called celiac disease and cannot eat gluten – no ifs, ands or buts about it. For people with celiac, even a crumb of gluten can cause havoc. Symptoms of celiac disease include diarrhea, painful bloating, cramps and weight loss. Not fun!

Why the big reaction? When a person has celiac disease, the body views gluten as an invader and mounts a major immune response. This immune reaction causes those fun symptoms – but it also ends up damaging the small intestine, which causes gastrointestinal distress and nutritional deficiencies.

Gluten sensitivity is a less severe immune response estimated to affect 18 million Americans, or 6 percent of the population. Non-celiac gluten sensitivity can cause similar symptoms – stomach cramps, diarrhea and bloating – but unlike celiac, it does NOT damage the intestine.

Should YOU go gluten free? If you experience painful symptoms every time to butter up a slice of bread, maybe. But if you enjoy whole-wheat breads and they don’t cause you discomfort, the answer is NO. Whole grains offer great nutrition, and you don’t want to take that off the (kitchen) table! And “gluten-free” doesn't necessarily equal healthy. You’ll get a lot more nutrition in a whole-wheat roll than a gluten-free brownie.