Kinger's Day at the Vet 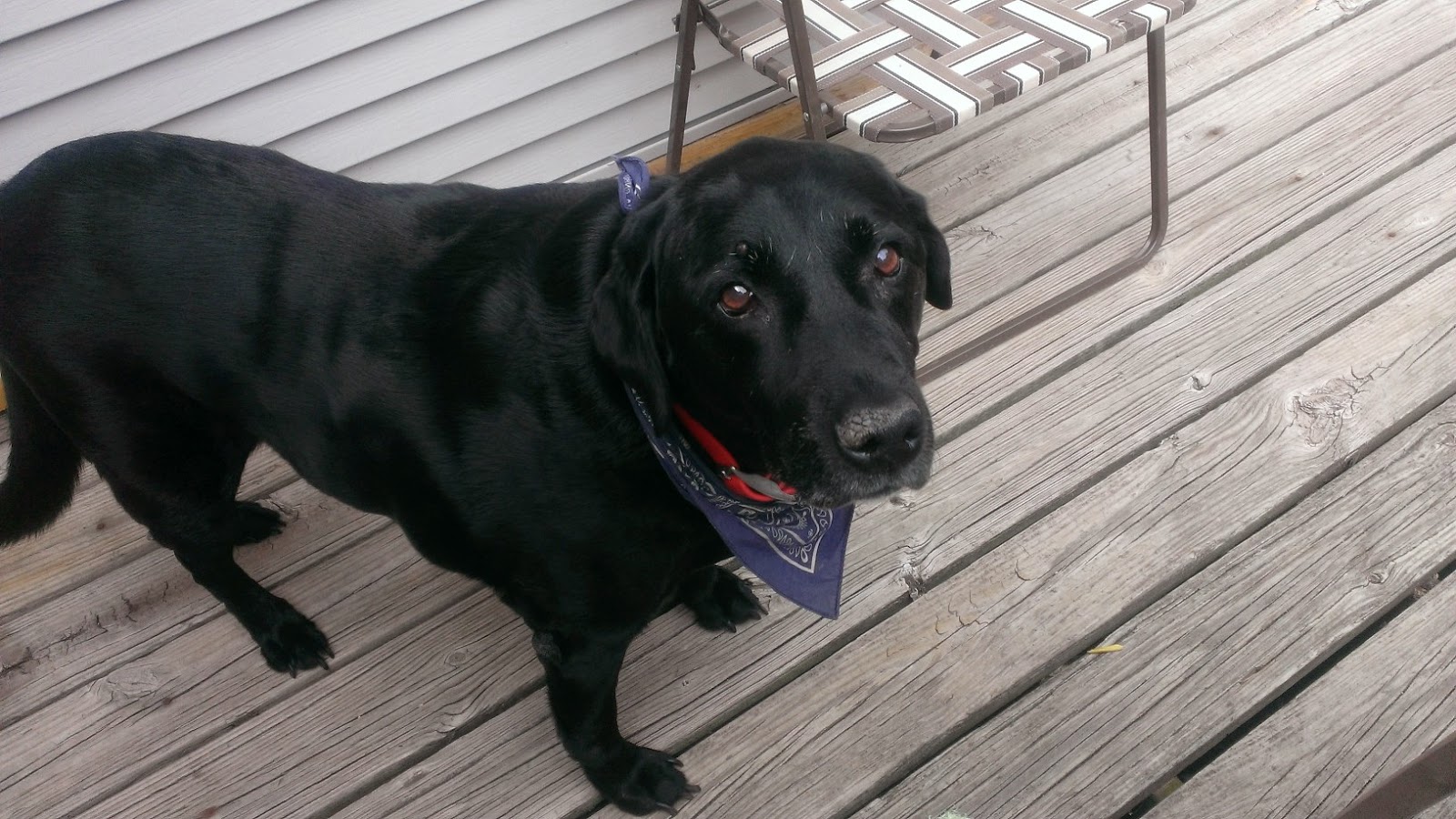 You guys know I am a Crazy Dog Owner!  Kingers is my bestest friend - I can not imagine what I would do without him.

I wanted to share my experience concerning Kingers and his health. My actions might help someone out there call the vet a little faster than I did.

Kingers has a bad left back leg. When he was about 5 he pulled a muscle in his hind leg and it has given him trouble since then. At the time the vet stated we could do surgery but no guarantee it will help and the recovery was at least 6 months. So we decided to use supplements and controlled exercise (I call this leg the bad leg).

At the same time the wart was growing Kingers starting having a really hard time laying down. We thought it was related to his bad leg getting worse.

We also noticed that his nails were growing fast and were long. So I decided to trim his nails.  I have cut his nails for 11 years no issue.  I went to cut the nail that was sticking out funny and he cried like a baby! I was shocked and stopped immediately!! That has never happened before.  My hubby said let's take him to the vet and have them cut his nails.

So I made a vet appointment to have his nails cut - discuss the wart growing and his terrible time sitting down.

On Monday we head to the vet. Kingers likes the vet office - so the vet trip is fun for him.
They weighed him he lost 1 pound - so my diet is working.  Then the vet came into the room.  I told her my concerns and the first issue was the wart.  She touched the wart and hair fell off around the wart. Not Good!  She told me she should remove the wart today.  I said sure! She also said she would trim his nails after she removed the wart.  So off Kingers goes to surgery! 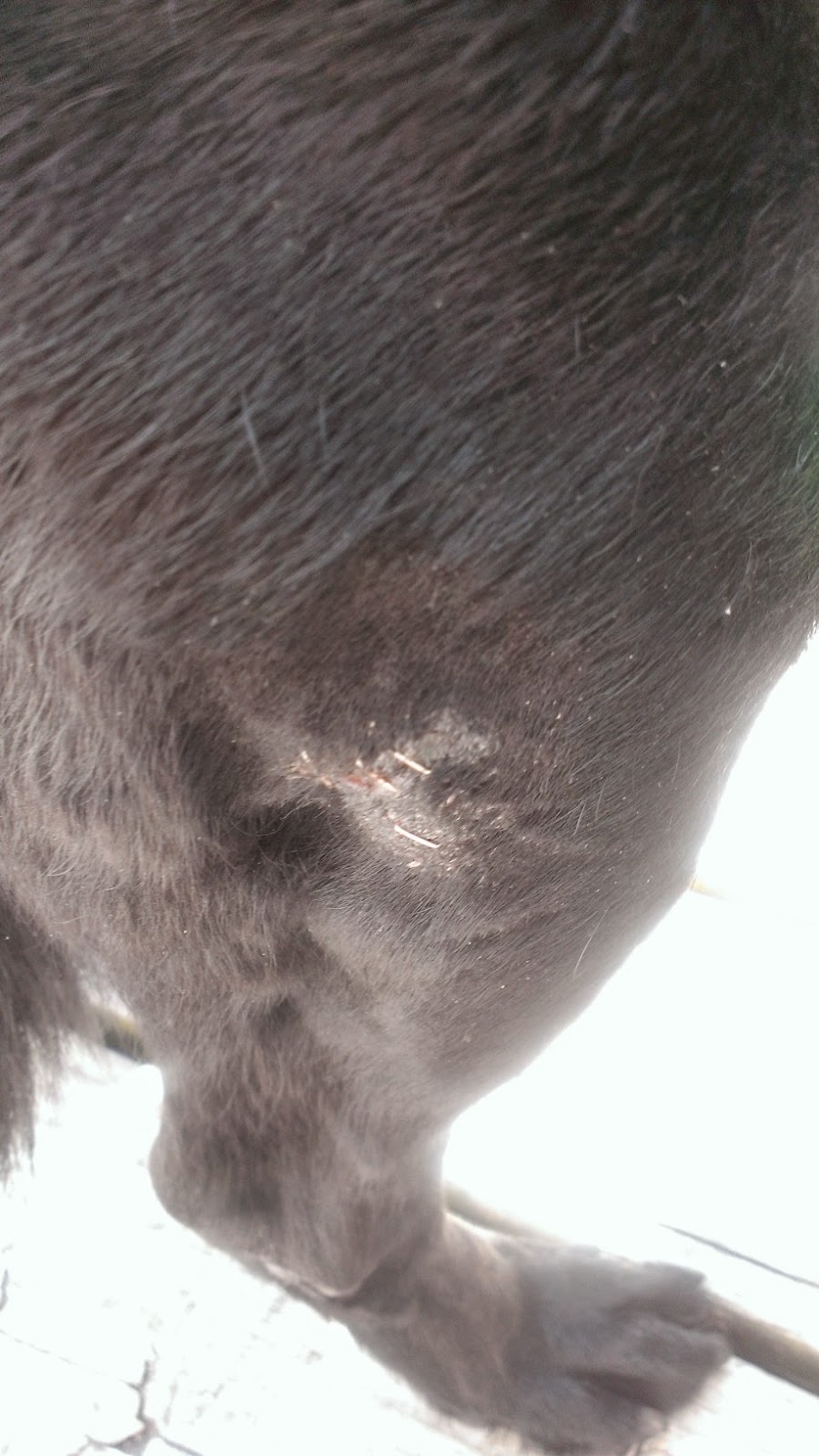 About 45 minutes later here comes Kingers. He is very happy to see his MOM - ME!  The vet begins to tell me what she has found.  When she started to remove the wart - Kingers had a terrible infection under the wart. She thinks he must have licked the wart causing a hair to get infected and then the infection grew. She was able to remove the infection and the wart. He has inner and outer stitches. She also wanted to send  the wart to be checked for cancer. I totally agreed!

She then told me about the nail that caused him to cry.  Somehow he pulled that nail away from the nail bed. It too was infected! I told her I am pretty sure I know how that happened. He loves to curl up on my bed blanket that is open weave. I bet his nail got caught and he pulled on it to get it out.

Finally that lump I thought was another wart on his face was a cyst. She was able to drain the cyst - hopefully it will stay gone.

So poor Kingers has been trying to sit down with only one good front leg.  No wonder he was having so much trouble! I felt terrible - the vet was supportive and assured me that there is no way I would have known.  Bringing him in to the vet was the only way - thank goodness I took him to the vet.

He is on antibiotics and pain meds - with another appointment scheduled to have his stitches removed. He is moving much better and can sit better each day!  Poor thing!

Why I shared my story is that I wanted others to know that as a pet owner we do not always know what is happening to our pet. The key is if you do notice something that you think is not right - contact your vet. As in King's case only the vet was able to discover the infection early on.   I personally think I should have taken King to the vet when the area around the wart started to grow - that growth was the area getting infected. Thank goodness it was only days and not weeks that I waited! I am sure when I would of been able to discover the infection - it would of been so bad that who knows - it could of cost Kingers his life.