TO HELP PUT INSTRUMENTS INTO THE HANDS OF CHILDREN

According to the President’s Committee on the Arts and Humanities, over six million students in public elementary and middle schools do not have arts or music classes, an overwhelming majority of which are in high-poverty schools.
In the “Mr. Holland’s Opus Foundation” PSA, American indie rock band Grouplove and popular musician Trombone Shorty are featured along with teachers and students to spread awareness about the importance of music education and demonstrate how music improves the quality of education and lives of children across the United States.
In the PSA, a teacher reveals to her students that their school has received a grant from The Mr. Holland’s Opus Foundation. Children of all ages are shown waiting for a curtain to drop and when they see hundreds of instruments laid out in front of them, they celebrate and cheer. The school’s principal reveals, "If we hadn't gotten the subsidy from Mr. Holland's Opus, I don't know where we would have gone for the resources." One high school student shared, "Those instruments are like Christmas gifts to kids. Every single instrument is another opportunity for another 200 kids to learn.”
The Mr. Holland's Opus Foundation keeps music alive in schools by donating musical instruments to under-funded music programs, giving youngsters the many benefits of music education, helping them to be better students and inspiring creativity and expression through playing music. The PSA directs people who would like to help put instruments into the hands of children to visit www.mhopus.org to learn how to get 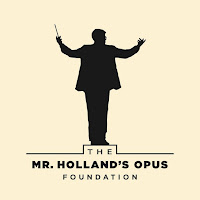 involved and support music education and the work of The Mr. Holland's Opus Foundation.

According to Americans for the Arts, schools that have music programs have higher graduation rates than those that don’t and low-income students who are highly engaged in the arts are more than twice as likely to graduate college as their peers with no arts education. By choosing to air this PSA, you are educating Americans on the benefits of music education in schools and helping at-risk students stay in school.
This campaign, which is sponsored by StubHub will run throughout the year.