Gorillas in our Midst by Richard Fairgray 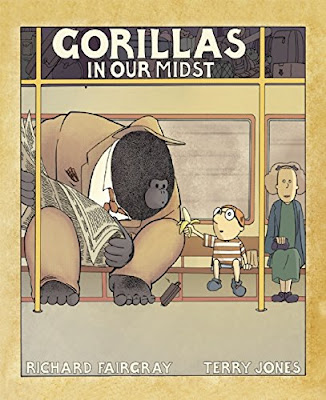 Gorillas can be hard to spot, because they are masters of disguise and really good at hiding. Gorillas often have jobs where they get to wear masks—that’s why so many gorillas are surgeons, astronauts, scuba divers, and ninjas. There are adult gorillas and kid gorillas. There are even gorillas that go to school with you. You may think you’ve seen a gorilla swinging by before, but it’s much more likely that he was an orangutan—orangutans are terrible at hiding. You will know when there are lots of gorillas living in your midst because the grocery stores will be entirely out of bananas. In fact, you should always carry a banana with you, because you never know when there might be a gorilla around.Gorillas in Our Midst is all silliness and fun, and is destined to become a new favorite. Comic artist Richard Fairgray’s illustrations are filled with wonderful details for kids to discover with each read. Kids will love spotting the gorillas on each page and are sure to laugh out loud at the gorillas’ many disguises. And, of course, a story like this can’t end without a surprising twist!

REVIEW
Gorilla's in the Midst is a really cute child's book about how there are gorillas everywhere in our daily lives.  I like the fact that each page left lots of room for Davey to make comments by pictures. It makes the book very very interactive for him.

Davey now wants to make sure we always have bananas.  He tells me "You know Nana we just might need it in case we find a gorilla."

This is really a fun story and I highly recommend the book.

Richard Fairgray was born and raised in New Zealand and has been publishing since he was seven years old. His main focus since then has been comic books, but he has taken time out during his life to work on films, to perform stand-up comedy, to teach high school, and to stick labels on honey jars. He has been working exclusively in comics for the last six years with long-time collaborator Terry Jones. Their main work together is the on-going series called Blastosaurus. He resides in Auckland, New Zealand.

Terry Jones was born in Wales. He taught high school aged kids in the UK for many years before immigrating to New Zealand. He retired from teaching in 2009 to focus on his writing. He has written newspaper and magazine articles, some non-fiction works, and two novels, The Left-Handed Gun and The R.U.M.B.L.E.R. He currently lives in Auckland, New Zealand.